Why do so many trips start with such an early morning flight? In our case that meant getting up at 4:00 in the morning for a 7:40 flight. On the plus side, it was a direct and short flight, on an airline that was not Ryan Air. For this trip, it was off to southern Spain, Costa de la Luz and to the adults only Garden Playanatural Hotel & Spa. Adults only always sounds a bit seedy but unfortunately for me, any time I’ve ever experienced an adults only place, it has been very un-seedy. Usually just what one would expect which is a standard resort but without the small children running around being annoying.

The flight, however, was full of annoying people going on bachelor and bachelorette parties, or Hen and Stags if you prefer. As we were preparing for takeoff, the flight attendant included in his usual messages over the intercom, one directed at the party goers “Please remember that this flight has children on it.” The flight was taking us to Faro, Portugal so I’m guessing that is where the adult-related fun was. For us, we were met at the airport by Tiago our thick accented driver. He was a bit shorter than me, but much stockier and solid even though he was a good 10 or 15 years older. As we were driving along and he occasionally engaged us in conversation with the usual weather comparisons between Portugal and Ireland, I noticed a couple of small boxing gloves hanging from his rearview mirror. Giving him a second look, I would peg him for a former boxer at some point. Clearly not one that did well over his carrier but probably had a few good stories to tell on the subject. I could have asked, but then I would have had to participate in a conversation with him which would have prevented me from mindlessly staring out the window. 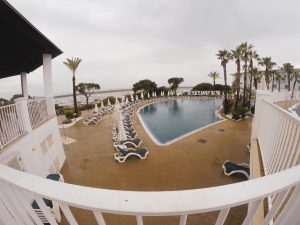 Our final destination was Huelva, España which was a bit under an hour drive. We arrived pretty early, and we were glad they were able to check us in right away. It was around 12:30 and we both were quite hungry having only had a small bite at the airport and nothing on the plane. The hotel we were staying in offered an all-inclusive option, so with our wrists straps on that would brand us as tourists for the remainder of our trip, we went down to the cafeteria. Entering the cafeteria, there was someone at the entrance to add a check mark to a little booklet they gave us, something they would do with each meal. I’m guessing the book was to keep people from sneaking in but also makes the wristbands pointless. The buffet had the warm foods to the right with some fried meat, some french fries, and various items such as a noodle paella. As a fan of paella I took a scoop of that, and some fries, and a few other things before we sat down at a nice little outdoor table. The waiter brought some water and a small bottle of white wine for us to enjoy with our lunch.

The hotel seems to cater to a lot of white European tourist, Germans, and English mostly. According to Tiago the driver, the primary tourist season is in August, which was nice for us coming in May where the hotel wasn’t packed with German-speaking tourist. However, the food was still being made to cater to the pallets of the German and English guests. The paella was not good at all and the rest of the menu a bit bland, including the white wine that tasted watered down.

Upon finishing lunch, we changed to our pool clothes and went to lounge by the pool for the rest of the afternoon. The water was freezing cold in the pool so instead of going for a swim I decided to lounge in a chair reading a book, napping, or people watching. The month of May must be the time of year that most of the Spanish tourists visit the hotel as I would say most of the guests were Spanish. Yes, a few northern European but not many. I was happy to see that none of the partygoers on the plain were at the hotel. I guess it was a bit too off the beaten path for them. 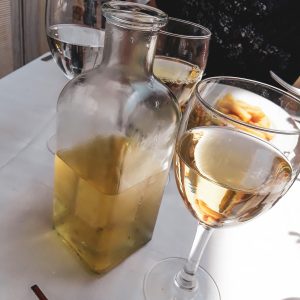 After our day or relaxing and later as we sat eating our dinner buffet and my head began to throb into what would turn into a massive headache, HK said to me, “According to the brochure the hotel offers a dinner option at another restaurant we can book to get some variety.”

Overall I wasn’t that impressed with the buffet. It was okay, and the desserts were tasty, but most of the mass-produced items were bland and lifeless. Lots of fried meats and they seemed to have a hard time keeping the buffet stocked for the not very large crowd of guests.

“Apparently we need to book the dinner for the next evening in the morning when we check in for breakfast.”

A quick walk around the place to check it out, then it was back to the room for an early evening. My head was throbbing, and hopefully, three or four ibuprofen and a good sleep would help. 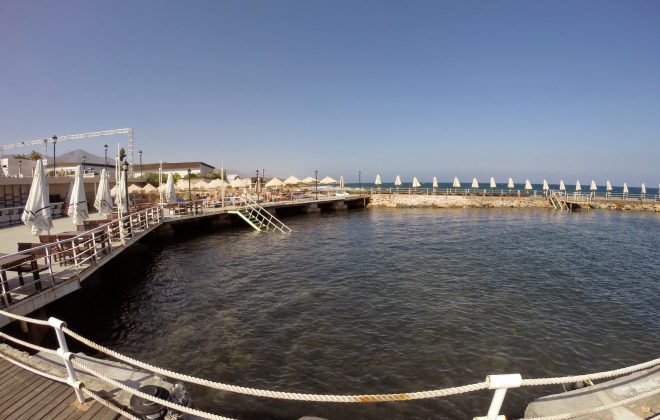 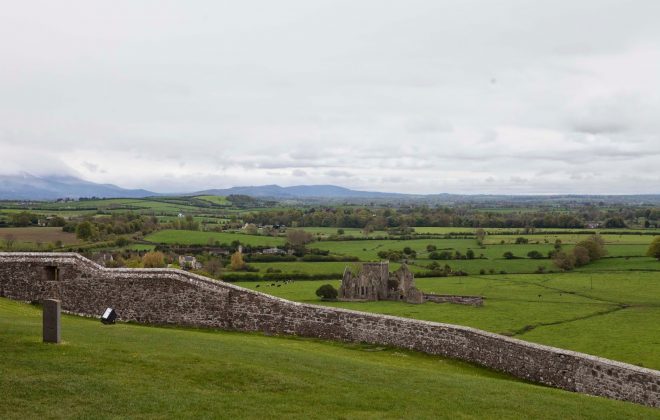