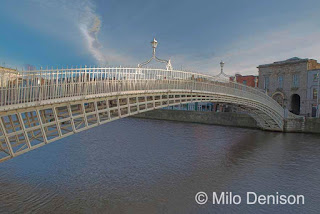 High Dynamic Range Photography sometimes mistakenly called High Dynamic Resolution Photography, “enables photographers to record a greater range of tonal detail than a given camera could capture in a single photo,” according to Cambridge in Colour. Basically HDR allows people to take multiple pictures of a scene and combine them together with dramatic effect. If used to the extreme, HDR photography creates a striking and surreal image. If used sparingly, it will bring out details that wouldn’t normally be visible on the image.

Taking a HDR photograph involves taking multiple pictures of the same subject with the camera in the exact same location at different settings then, after the pictures are taken, manipulating those three or more images in layers using HDR processing software.

Technically HDR photographs can be taken at any time, but it’s usually best to take the photographs in lighting situations where there is a lot of contrast between the light and dark areas of a scene. For example: shooting out a window from inside a house while including the inside walls. Usually the light outside is quite a bit brighter, and so the camera either exposes for the interior or exterior, but is unable to expose for both.

Most HDR photographs are usually taken in the evening or at night of a static subject, such as a cityscape or building. When taking a scenic picture just after dusk, the sky might still be a little bright for the foreground. The image will look either to dark in one area, or to bright in the other. If taking a picture later at night, any streetlights or other light could washout portions of the picture while leaving other areas black.

Since most HDR photographs are comprised of 3 to 4 images, it is necessary to set the camera on a solid surface and use a remote trigger or cable release. The camera should not be allowed to move at all in between each image, as they need to line up later on. It’s possible to use a table, chair, or any other solid surface, but it is recommended to use a sturdy tripod.

Attached the camera to the tripod, and either a cable release or remote trigger to the camera. Then compose the image. The camera must be set to its manual functions. Then adjust the f-stop and shutter speed to best compose the scene. Take the image using the cable release or remote trigger. Then dial-down the shutter speed or f-stop by one stop. Be very careful not to move the camera, as this will cause the images to be out of line later on.

Take the picture again and repeat the dial-down process. After taking a few pictures with the camera dialed-down, repeat the process except for increasing the shutter speed or aperture opening over what it was originally set at. It might not be necessary to use all the images when processing them and, if they aren’t needed, they can be deleted later. After a few times of doing this, it will be possible to get a better idea of how to set the camera for each image. 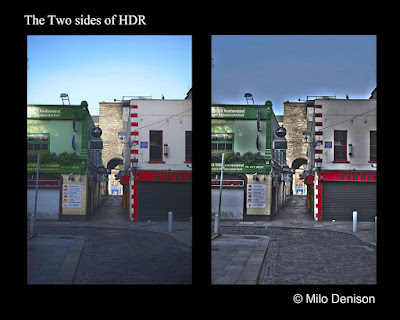 Previous versions of Photoshop involved creating multiple layers and manipulating each in a time consuming process. Current versions of the software allow users to import the images and batch process them into one image. Then the images can be further manipulated as needed.

Photoshop, however, is an expensive piece of software so there have been other companies to release HDR processing software. One of the more popular ones is Photomatix Pro. Photomatix Pro was designed specifically to create HDR images and is pretty easy to use. There are also some free HDR programs available that might be worth trying for a novice user before spending money one on of the other products.

Even though HDR photography can create interesting and dramatic effects, it can also be time consuming and sometimes frustrating endeavor. High Dynamic Range Photography involves a lot of planning before taking the pictures, some patience when taking the pictures, and time spent after the pictures where taken to process them. If all is done well, the final image will be a fantastic piece of art to hang on the wall.