Birmingham Small Arms Company (BSA) started in 1861, originally produced guns and bicycles before manufacturing its first bike with an engine in 1905 and its first official motorcycle in 1910. With motorcycles like the Gold Star and Rocket Three, the companies’ bikes were popular among the café racers of 50’s and 60’s.  As the motorcycle division of the company grew, BSA eventually became the largest manufacture of motorcycles in the world, before going out of business in the late 1970’s. 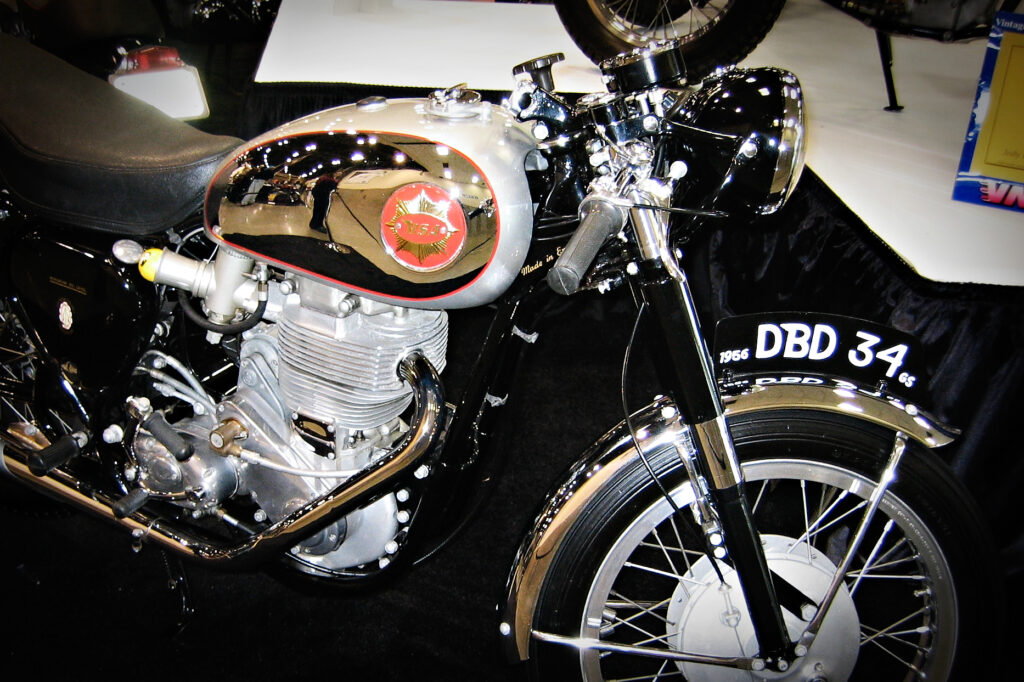 The first motorcycle fully produced by the BSA Company was built in 1910 using a 498cc 3 1/2 horsepower single engine. In 1921, the company switched to a v-twin engine, and a 770cc engine on the model A.

The most well known and easily recognized of the company’s line of motorcycles is the Gold Star. Production of the Gold Star began in 1938 and ended up as one of BSA’s longest manufactured models, with production eventually ending in the early 1960’s. During the 1950’s, the Gold Star was one of the fasted production motorcycles available with an ability to exceed 100 miles per hour and was well regarded for its ability to race on the street as well as dirt tracks with little modifications.

During the late 60’s BSA began to experience the strong competition brought on by the highly reliable Japanese motorcycles. In an attempt to save British motorcycles, the government stepped in, in an attempt to save the merged BSA and Triumph group. They added Norton into the rescue as well, creating the Norton-Villiers-Triumph (NVT) Group.

Unfortunately, the merger of the companies was too late to compete. The last BSA motorcycle was produced in 1973. Norton later closed its doors in 1978 and Triumph went out of business around the same time, although it did attempt to manufacture motorcycles in the early 1980’s.

In 1991 Andover Norton and BSA merged to form a new company primarily manufacturing spare parts. Then in 1994 a newly formed BSA Regal Group of Southampton continued to produce parts, and also began producing limited-edition retro styled motorcycles. Although continued rumors of a mass market motorcycle continue to circulate about revival, like the Triumph Company has seen, no actual production bike has made it to fruition.

Who Was Mary Shelley?

Who Was Frank Buckles?