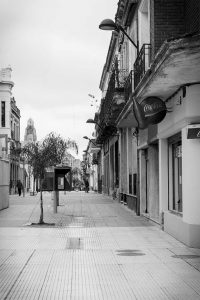 It was early afternoon as we were walking down one of the main streets in Montevideo, Uruguay. The old shops were either closed or empty, as were the streets. To my right was my travel partner carrying her purse over her right shoulder, and me with my bag housing a camera on my back. We were walking in the ocean’s direction, which was only about a block ahead of us, the wind was blowing as we could see the sun trying to work through the thick clouds in the sky. We were on good terms for a brief moment on the trip and enjoying the walk. As we were walking, I noticed to my right that she stopped. Turning to look, it took me a second to realize what was happening. Some kid was tugging at her purse, expecting the strap to break but it didn’t. On seeing the kid who was approximately 13 or 14, I reacted with little thought and began to chase him in an attempt to give him a beat-down. He ran to the opposite side of the street where 4 or 5 other kids of the same size and age located. They had little bamboo sticks that they started waving at me, trying to imply in a threatening manner that they would hit me with them. Seriously though, they were little sticks and kids, so my anger took over any potential fear I was supposed to be experiencing.

“What are you going to do with that?” I yelled at one of them, as I chased after the little bastards, yet not quick enough to catch one of them. They responded in Spanish, with something I didn’t understand. I was informed later that it was kind of funny with me yelling in English and them in Spanish, and neither of us understanding the other.

After what was probably less than a minute, I gave up the chase and they quickly moved together as a group and began to walk away. I went back to where my travel companion was to see if she was okay, and finding out she was, we walked in the other direction as if nothing had happened between either group, in what went from a quick bit of excitement to a bit of a sural response.

It didn’t take long for me to calm down, but it really is good that the little bastards were quick, because if I had gotten hold of one of them I probably would have seriously injured him. I know in a place like Montevideo income is low, and sometimes people have to do extreme things to live, but I didn’t get that vibe from these kids. I think these kids were well enough off, and just trying to steal some silly tourist purse.